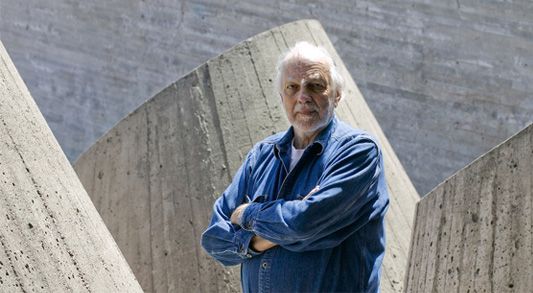 “People sometimes ask me where I want to go take pictures. I never have an answer. I say I’ll know when I get there.”

“I think this is the only way to stay fresh. All of us have only so many creative ideas. If you have a preconceived notion of what you want to photograph, your work all starts to look alike. I photograph what’s in front of me. Then people, buildings, objects, and landscapes tell their own stories.”

It is this philosophy that has kept Gerald Ratto’s work fresh and exciting for more than half a century. Born in 1933, on the other side of San Francisco Bay, in the town of Richmond, he and his family moved north of the city to Sonoma when he was a child. He started photographing with his mother’s 15-cent box camera when he was 12, and has had a camera in his hands ever since.

Gerald went to the University of California, Berkeley to study architecture. However, he soon found his fascination with light and form was better expressed behind the camera. He transferred to the California School of Fine Arts (now San Francisco Art Institute) famed photography program, founded by Ansel Adams, in 1945. There he received invaluable creative and professional insights from the programs many instructors, including department head, Minor White, as well as other photographic luminaries such as: Imogen Cunningham, Dorothea Lange, and Edward Weston.

His distinguished career in fine art and commercial photography began while he was still a student. Before graduating, his work was exhibited alongside his instructors in the landmark juried “Perceptions” show at the San Francisco Museum of Art in 1952. One of his first clients was Welton Becket, whose Los Angeles architectural firm was the largest in the world when he died in 1961. Ratto’s client list today includes I.M. Pei, Buckminster Fuller, Gensler, Skidmore, Owings & Merrill, and others. His architectural work has been published in major architectural interior and landscape design magazines and books.

Although architectural photography has provided his livelihood, he never really thinks of photography as work. “It’s just what I do. I take pictures wherever I am.” Gerald is not one to ever take for granted his past accomplishments or successes. He approaches every project as a clean slate on which he can apply the best of his craft and his client’s vision. “People relate to Gerald’s work because it is arresting, as well as aesthetically pleasing and beautiful,” said Suzy R. Locke, President of Suzy R. Locke & Associates, art consultant to corporations, restaurants, and private individuals. “His approach eliminates the clichés.”

“When I’m working with architects, it is my challenge to take a picture that reflects the architect’s skill.” When he is not photographing architecture, he is busy selecting new subjects of work for private commissions, refining new portfolios, and managing his personal archive of vintage photographs.